Nokia has changed the naming of its devices this year. For example, the company has released the G10 and the X20. In add on to these devices, Nokia has also released the G20. 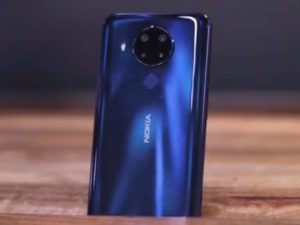 Nokia is known for releasing budget-friendly and solid devices. This year it wants to bring a little more overview in the model lines, and therefore comes with the G-series and X-series. We previously published the Nokia X20 review of the latter series. Now it’s time for the Nokia G20. With the G20, Nokia has released a budget device with a battery life of, according to Nokia itself, no less than three days. We have extensively tested whether the battery lasts for three days and how the device performs further in the Nokia G20 review.

In the past, Nokia devices were delivered in a square box. This is not the case with the G20, and it comes in a rectangular box. The contents of the box are quite minimalistic, and it contains, in addition to the device, the usual paperwork, a sim needle and a charger, plus a USB cable: no superfluous luxury, but everything you need.

Nokia has sent us the G20 in colour “Night”. This is a kind of purplish blue, a nice colour. In addition to this colour, the G20 is also available in colour “Glacier”. The device has an HD + 6.52-inch screen and has a resolution of 720 x 1600 pixels. This screen is of excellent quality. At first glance, you wouldn’t realize it’s just an HD+ screen. The type of screen is an IPS LCD, by the way. Unfortunately, the screen is less legible in bright sunlight. The auto-brightness was a bit slow to respond to a change in lighting conditions. On the other hand, the screen can be dimmed sufficiently. Nokia has placed the sim tray and a special button on the left to open the Google assistant. This button is unfortunately not customizable. On the right, there’s a power button with the volume button above it. The power button is also used as a fingerprint scanner. The top has room for the 3.5-millimetre connection and the bottom for the USB-C connection and the speaker.

We can actually be brief about the interface; Nokia supplies its devices with Android One. This is a clean, bare-bones Android version with no unnecessary fuss. On the home screen, you can find the Google Discover feed by swiping to the right on the screen. By sliding down on the notification bar and quick settings. Swiping up opens the app drawer.

The Nokia G20 has dual SIM functionality. So you have the option to put two SIM cards in the device. The great thing is that this space doesn’t come at the expense of an SD card. This can be placed next to the two SIM cards in the device. You can call and send messages with the Google app. You can also type messages with the Google keyboard. These apps are fine to use. 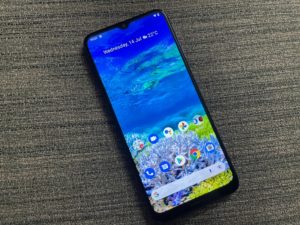 Google Chrome is installed to use the internet. A great app for surfing the internet. The device does not have 5G and WiFi 5GHz, but we see that more in this price range. So we only see 4G and WiFi 2.4GHz on this Nokia. Furthermore, GPS, Bluetooth and NFC are supported. The device also has an FM radio.

Although the screen is not the highest resolution, watching movies is fine. The only downside is that the screen is not sufficiently bright in direct sunlight. To listen to music, Nokia has provided the G20 with a 3.5-millimetre connection. There is also an FM radio. To listen to the radio, you need a wired headset, which serves as an antenna. The quality of the sound is okay, although the low tones are a bit meagre. The volume is also okay.

On the other side of the device, we find the round camera module. In this module, Nokia has placed four lenses, the 48MP main camera, a 5MP wide-angle lens, a 2MP macro lens and a 2MP depth sensor. 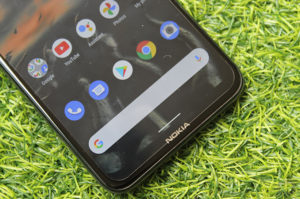 When opening the camera app, we experience a small delay. The app itself looks neat and tidy. Above the shutter button, we find a few options so that you can quickly switch to video or to night mode. Next to it is a menu button that allows you to quickly switch to panorama mode or macro mode. There is also a special button next to the shutter button with which you can beautify photos.

Photos we take with the Nokia G20 are generally fine. At least, photos were taken with the main camera and the wide-angle lens. Macro photos are nothing to write home about. This also applies to photos taken in the dark. You can view the photos we took with the Nokia G20 in the online photo album.

With the selfie camera of the Nokia G20, you can take selfies of up to 8MP. You shoot videos in Full HD. The quality of these videos is reasonable, as is the recorded sound. While filming, you don’t have the option to switch between the main lens and the wide-angle lens. You do have the option to zoom in during filming, but the quality deteriorates sharply when you zoom in while recording.

Nokia has equipped the G20 with a MediaTek processor, the Helio G35. This processor is not the fastest but does its job properly. You don’t have to expect a fast processor for a budget device. We have not experienced this as disturbing, apps open almost immediately, but it occasionally takes a while before an app is loaded. The advantage of a less fast processor is that it is kinder to the battery than a high-end processor. Nokia claims that the battery of no less than 5050 mAh could last three days. We didn’t manage to do this in our test period, but we did manage to do two days with a screen-on-time of more than 8 hours, which is a great achievement. We should mention that this was with fairly intensive use. You can charge the battery with the included 10 Watt charger.

As we are used to from Nokia, the G20 is again a solid device. So a real Nokia. For a price of about 170 euros, you get a lot of value for money. When you come from a faster device, you will have to get used to the fact that the device is not the fastest. However, this is not really disturbing. With a large battery of 5050 mAh, the device lasts for two days on one battery charge.

The storage memory of 64GB may be a bit on the lean side, but the memory can be expanded with an SD card. In addition to the SD card, you can also store two SIM cards on the device. We actually see very few downsides. If we have to mention a downside, it is that the screen cannot be bright enough in direct sunlight, but this is not unusual for a budget device.